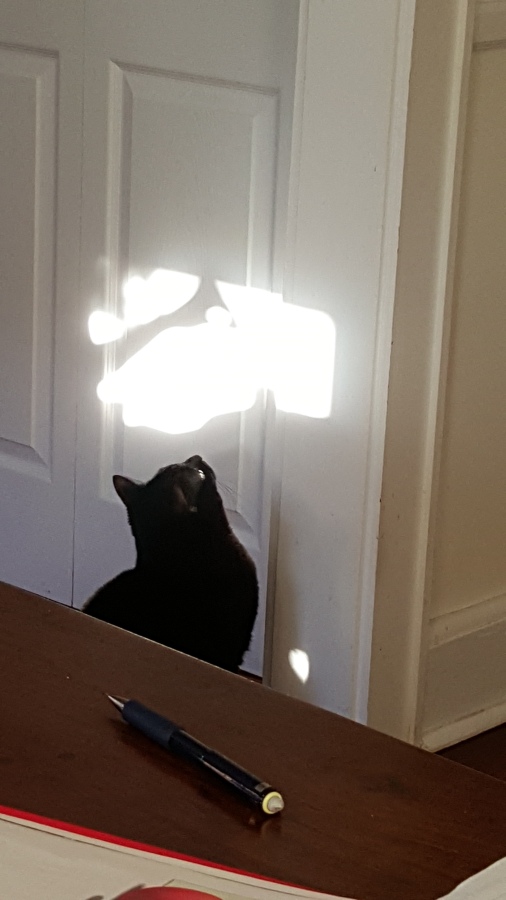 There are certain places that my departed cats seem to like hanging around. They’re basically the same places they liked to be when they actually walked on four legs–any place where they might get fed, or could play with water.

Often I’ll be standing at the kitchen sink, or at one of the bathroom sinks, and I’ll feel that familiar delicate brushing of the back of my leg with their whiskers or the side of their face, inquiring if dinner is going to be soon. Or the slight flick of their tail as they circle me, winding between my legs and making it impossible for me to take a step for fear of squashing them. Sometimes I’ll feel the cool, “bop bop bop” of a tiny nose tapping against my leg, sniffing for who knows what.

I’ll turn around, and sometimes it’s my actual, living cats. But sometimes there is nothing there.

I’ll look around to see if maybe one of them brushed past me and quickly left the room, but usually I’ll see them both snoozing on their cat beds on the dining room table. Beds that, inexplicably, they refused to get inside, but will make biscuits on the top until they flatten out and become mattresses instead of hidey caves.

They don’t just make themselves known by touch. I’ll also hear them going down the stairs. Always down, never up. I’m not sure why. I’ll be sitting on the couch, right next to the stairs, and hear the unmistakable padding of paws down the stairs, each one followed by the slight click of their toenails. I would like to say that sometimes it’s my actual cats, but there’s never a cat there. Our floors are creaky, but they don’t mimic the sound of a cat walking down the stairs.

But most unsettling is seeing them. I mean, I don’t see them. But my two cats do. Always in our bedroom or closet, and always on the ceiling. They will both pause, look up at the same spot on the ceiling, and then their eyes will dart back and forth, back and forth, always looking at exactly the same spot. I have followed their gaze many times, looking for a bug, or a spider, or a swaying spider web, or a shadow, or a flash of light from outside. There is never anything there. I think, maybe it’s a sound coming from the HVAC system, or a bird or squirrel on the roof, but I never hear anything.

This mostly happens in our walk-in closet, where we have one of our cats’ ashes.

If I thought there were a ghost of a person in my house, I would move the hell out. Even if it was someone I knew and loved. That’s just too creepy. But the cats? I don’t know, it’s kind of reassuring. Like they’re just visiting to make sure everything is ok, maybe giving our cats some pointers about getting at the hidden snacks, sniffing the different foods they’re eating, sniffing their butts.

Our cats don’t seem too concerned about it, so I guess it’s ok with me.