Only my son could create his own attraction at Disney.

It was 100 degrees and 100% humidity at 9:00 a.m., and we were in Animal Kingdom. Our sights were set on a show and we were running late, so we were moving fast (and sweating). Not that the show is all that compelling, but it’s air-conditioned and we had a Fast Pass we didn’t want to lose.

As we crossed a bridge near the theater, my daughter asked to stop for a picture. Knowing that it could potentially turn into an extended photo shoot, followed by an Instagram Posting Fest, my husband gave her an exasperated look, and she said “Never mind,” and started walking again. My son hung back a second looking dazed and slightly stricken, and muttered something under his breath.

“It must have been loose, and I put my arm on the railing, and now it’s gone.”

We all peered over the bridge, expecting to see it about 20 feet below on the ground or in the water. But it was lodged in the bridge’s trestle (I’m not sure that’s what it’s called, but I’m going with it), about 10 feet below us. No way to reach it.

“We need one of those grabber thingies,” my husband declared, and darted off to find the nearest Cast Member. Lo and behold, he only had to travel about 10 feet, and she had a grabber thingie! Apparently that’s part of their uniform.

About 15 minutes went by, and it was clear that we were not going to be able to reach the Magic Band with the grabber thingie no matter what angle we tried (including climbing the fence and dangling over, which the cast member definitely didn’t recommend).

Additional cast members arrived, each of them trying different angles. At one point our original cast member was actually ON THE GROUND–lying on 100-degree asphalt–trying to get the grabber as far down as possible. Hang on, I have photos: 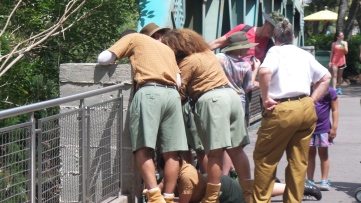 A curious crowd was beginning to gather. They seemed to think a child had fallen overboard, or an alligator had been spotted in the river.

The bridge was getting crowded, so I started telling people (as quietly as possible) “Nothing to see here folks, no one fell over the railing. It’s just my son. I mean, my SON didn’t fall over the railing, but his Magic Band did. We’re trying to grab it. Anyway, move it along, please.”

Eventually the big guns had to be called in: The Cast Member with the Really Long Grabber Thingie. Ok, that sounded wrong. But you know what I mean. The problem was, the grabber was so long that to get it at the right angle, the part you had to squeeze with your hand was too far away. So they rigged up a second, shorter grabber to act as the “squeezer.” It was really quite amazing: 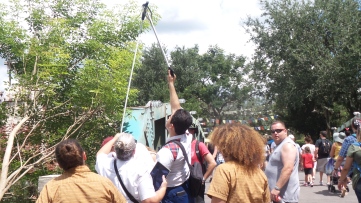 Just as things were looking up, two cast members who had started out on the bridge threw a kink into the plan. They had gone down to the ground to see if there was any way to reach it from there, and they started shouting and waving. Here they are shouting and waving:

“Knock it down!” they kept saying. “Knock it into the water and the boat will get it!” 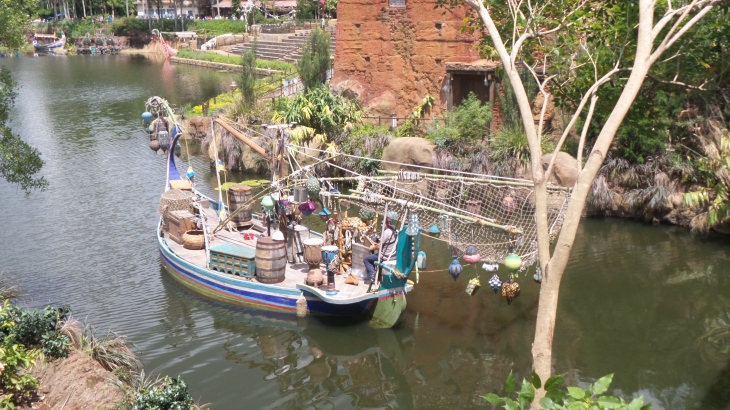 THAT boat. Which appeared to be decorative, not really serving any purpose other than making you feel like you’re in Africa/Asia/Avatar Land, and the captain just looked confused by all the shouting and waving.

“I don’t think knocking it into the water would be a good idea,” I said. “How would the guy on the boat be able to reach it? He would also need a long grabber to get it off the bottom of the river.”

“I’ll tell you a little secret,” one of the cast members said. “It looks deep, but it’s only a few inches of water.” Gasp. Disney, you never cease to amaze me with your witchery!

It didn’t matter anyway, as that ship had sailed. But wait, there was another one right behind it!

The captain of this one was also confused by the shouting coming from the land and above his head, so that opportunity also passed. Fortunately the crew on the bridge had largely ignored Chip and Dale down below, and the Man with the Longest Grabber Thingie triumphantly produced the wayward Magic Band.

HOORAY! A cheer went up from the crowd. Actually the crowd was just me, my husband, my daughter, the cast members involved and a photographer who was stationed on the bridge and had been watching the melee when he wasn’t ambushing happy families for unexpected photos.

And boy was magically (and sheepishly) reunited with Magic Band.

Do you see the nice man with the white shirt and the tablet? At the end of it all, he pulled us over to a shady spot and gave us three fast passes for our “trouble.” Seriously? We were the ones causing the trouble!

And THIS is why Disney World is, indeed, the Happiest Place on Earth.